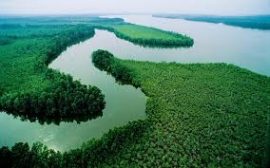 Over the last 4 decades River Niger has continuously been affected by the impact of climate change and abuse
from human activities to the extent that in June 1985, the river was completely dry in Niamey (Niger Republic)
for the first time in history. Similar low flow was recorded 2003 that was among the lowest in 50 years and the
month of April, May and June are its most critical low flow periods.
The continued low flow, which is as a result of the impact of climate change coupled with the enormous
negative human activities is now increasing the rate of movement of Sahara desert southward towards the
Atlantic Ocean. The low flow has also lead to the continued reduction in storage of reservoirs (e.g Kainji and
Jebba dams) and also reduction in food crop production, water shortages due to increasing water demand,
river pollution, weed encroachment, increasing water borne diseases, mortality rate, famine, urban migration
and poverty.
According to the 1995 UNESCO Study Report No. 52 on the hydrology of selected discharge of rivers in Africa,
the river Niger ‘loses’ nearly two-thirds of its potential flow due to seepage and evaporation in the Inland
Delta, the latter being aggravated by the fact that the river here touches the southern flanks of the Sahara
desert. The Inland Delta, located in Mali, is swampy with the sandy soil that has a network of tributaries,
channels, swamps and lakes covering about 30,000 km2
during the wet season which also extends into the
Sahara Desert.
Experts have been particularly worried by the proposed construction of a dam at the downstream of the
Inland Delta at Taoussa in Mali that was approved by all the 9 NBA member countries (including Nigeria) for
the NBA Shared Vision and Sustainable Development Action Plan. The location of Taoussa dam just
downstream of the Inland Delta could technically aggravate the tremendous inundation in the Inland Delta
deeper into the Sahara desert. On the other hand, the approval the Fomi dam in Guinea and Kandaji dam in
Niger are regarded by experts as the most effective measures for sustainable water resources and ecosystem
conservation of the river Niger.
Today, Lake Chad has almost completely disappeared from its basin, with many unfolding tragic consequences
for victims in the affected region of Nigeria and Chad. Unlike the case of Lake Chad, however, it is believed that
the consequences of the disappearance of River Niger in Nigeria will have all the makings of the proverbial
Armageddon, in terms of its cataclysmic socio-economic and political effects on the nation.